A native to the Rocky Mountains, this evergreen alpine plant has dense, soft-textured, green foliage. Proven to be extremely hardy, and thrives in poor, rocky soils. A choice groundcover for use in mass plantings, along slopes and hillsides. Excellent for bonsai.

Price: $64.00
Note: This plant is currently NOT for sale. This page is preserved for informational use
Share
Share on:
Share Link:
Add to Wishlist
Detail
Key Feature

Border, Coastal Exposure, Erosion Control, Ground Cover, Hillside, Mass Planting, Poolside, Rock Garden, Urban Garden
Watering Needs:Once established, water occasionally; more in extreme heat.
Botanical Pronunciation:ju-NIP-er-us kom-MU-nis
Plant type:Shrub, Conifer
Deciduous/evergreen:Evergreen
Growth habit:Spreading
Growth rate:Slow
Average landscape size:Reaches 8 in. tall, slowly spreading to 36 in. wide.
Special features:Bird Friendly, Easy Care, North American Native Selection, Waterwise, Year-round Interest
Foliage color:Blue-green
Blooms:Conifer; prized for foliage.
Garden styleAsian/Zen, Rustic
Design IdeasExtreme tolerance of brutal cold and humidity makes this creeping Juniper a reliable plant for difficult sites. Because they are shrubs, you can plant them through weed-blocking fabric. Thrives in rocky soils and mountainous conditions, where the soil is thin. Use on slopes for coverage or erosion control, allow it to drape off retaining walls or cover unsightly transition zones at the edges of paving. Prostrate habit and slow growth also makes it a candidate for potted bonsai. Excellent deer resistance.
Companion PlantsClematis (Clematis); Rose (Rosa); Catmint (Nepeta); Barberry (Berberis); Russian Sage (Perovskia); Maiden Grass (Miscanthus)
Care
Care Information
Highly adaptable and easy to grow in average well-drained soils, even poor, rocky soils. Water deeply, regularly in first growing season to establish root system; once established, reduce frequency. Control weeds until plants have filled in. Feed in early spring. Prune only as needed to maintain desired shape.
History & Lore
History:
This is the "common" juniper native to an enormous range of Europe, Asia and North America. The majority of the forms are upright shrubs to small trees no taller than twenty feet. This shows that like so many other Juniperus species it exhibits a diversity of forms to include this low growing variety. It was first identified as J. alpina, which suggests its origins as a high mountain alpine plant adapted to heavy snows and persistent winds. The genus was classified in 1767 but species remained confused for centuries due to natural variability. There are over sixty other species which originate around the world in the northern hemisphere. This variety was introduced by Monrovia in 1999.
Lore:
Juniper berries are the flavoring agent of gin. It's oil was once highly valued as a medicinal and used in many compounds. It was used to line pits where Native Americans stored food for winter because its oils prove a natural insect repellant.
Reviews 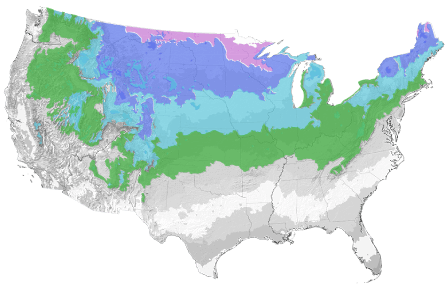