Coastal Exposure, Container, Espalier
Watering Needs:Needs regular watering - weekly, or more often in extreme heat.
Botanical Pronunciation:VIG-nuh kar-uh-KAL-uh
Plant type:Vine - Requires Support
Deciduous/evergreen:Semi-evergreen
Growth rate:Fast
Average landscape size:Twining stems 15 to 20 ft. long.
Special features:Easy Care
Foliage color:Green
Blooms:Purple flowers infused with white and creamy yellow, summer to early fall
Flower color:Purple
Flower attributesFragrant, Showy Flowers
Garden styleCottage, Rustic, Tropical
Care
Care Information
Provide well drained soil. Thrives in warm, humid conditions. Provide support such as a trellis or arbor. Follow a regular watering schedule during the first growing season to establish a deep, extensive root system. Apply a general purpose fertilizer before new growth begins in spring.
History & Lore
History:
This fragrant variety is aptly named, as it is said to have been found in Thomas Jefferson's garden in Monticello, where it was grown as an annual. The species Vigna caracalla (syn. Phaseolus caracalla) is a leguminous vine from the family Fabaceae, originating in tropical South America and Central America. The species name caracall is a corruption of the Portuguese caracol, meaning snail. It was introduced into European gardens from its native South America in the eighteenth century. Whether Thomas Jefferson ever received seeds or plants of the species is not entirely validated, but it is said that he introduced the plant to America, and it was being grown in American gardens by the 1830s.
Lore:
On April 1, 1792, Thomas Jefferson wrote to Benjamin Hawkins about the Vigna caracalla, saying "The most beautiful bean in the world is the caracalla bean which, though in England a green-house plant, will grow in the open air in Virginia and Carolina."
Reviews 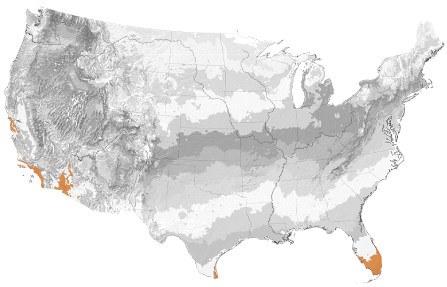