Mass Planting
Watering Needs:Needs regular watering - weekly, or more often in extreme heat.
Botanical Pronunciation:SIT-rus si-NEN-sis
Plant type:Citrus
Deciduous/evergreen:Evergreen
Growth habit:Rounded
Growth rate:Moderate
Average landscape size:Moderate growing to 15 to 20 ft tall, 10 to 12 wide. Smaller as a container plant.
Special features:Attracts Butterflies, Edible, Waterwise, Year-round Interest
Foliage color:Green
Blooms:Early spring
Flower color:White
Flower attributesFragrant
Garden styleMediterranean, Tropical
Design IdeasWith its glossy, dark evergreen foliage, this Citrus lends itself to growing in the sun in a large terra cotta pot--a classic Mediterranean look. Or plant one on each side of the doorway in ground or in pots for an instant frame. Grow in fruit or kitchen garden for ideal irrigation and soil care, or plant to break up a long fence line with foliage, scented flowers and fruit.
Companion PlantsAccent the lightly variegated foliage of this small tree with Bush Mallow, (Lavatera maritima) and pure white blooms of Bridal VeilTM Tropical Hibiscus (Hibiscus rosa-sinensis Bridal VeilTM 'Monora'). Create a striking Mediterranean look with Tiny Tower Italian Cypress, (Cupressus sempervirens 'Monshel') and Hazel Spanish Lavender, (Lavandula stoechas 'Hazel').
Care
Care Information
Follow a regular watering schedule during the first growing season to establish a deep, extensive root system. Watering can be reduced after establishment. Feed with a general purpose fertilizer before new growth begins in spring.
History & Lore
History:
The first navel orange was imported into the U.S. in 1873 from Brazil. There it was developed by crossing C. sinensis with x Citroncirus webberi, a seedling of an earlier cross of the orange and true citron. The first American named navel was 'Washington' and most other cultivars were discovered as sports of this original form.
Lore:
The genus citrus is native to Asia and was first brought west to Africa in ancient times, then to Spain and finally to the New World.
Reviews 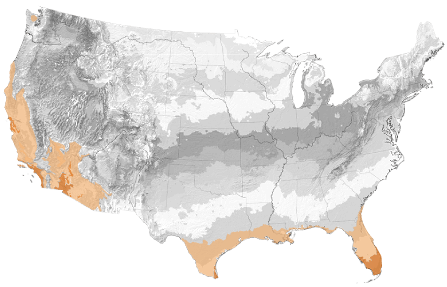