Price: $385.00
Note: This plant is currently NOT for sale. This page is preserved for informational use
Share
Share on:
Share Link:
Add to Wishlist
Detail
Key Feature

Full sun
Watering Needs:Best with regular watering - weekly, or more often in extreme heat.
Plant type:Tree
Deciduous/evergreen:Deciduous
Growth habit:Weeping
Growth rate:Moderate
Average landscape size:Arching, pendulous branches form a small tree 10 to 15 ft. tall and wide.
Special features:Attractive Bark
Foliage color:Green
Blooms:Early spring
Flower color:Pink
Flower attributesShowy Flowers
Garden styleAsian/Zen
Design IdeasThis is the quintessential cherry for the Japanese garden, but it's equally as well suited to the western traditional landscape. Plant where it's full form can be appreciated without distractions. Beautiful in a lawn or amidst a sea of muted groundcover where it becomes focal in early spring, or as soft summer breezes cause its tresses to gently sway. A favorite for overhanging water gardens and ponds. Use close to outdoor living spaces and in foundation planting where beautiful red bark may be appreciated up close in all seasons.
Companion PlantsThis lovely tree belongs in Japanese style compositions with Variegated Japanese Water Iris, (Iris ensata 'Variegata'), Nuccio's Wild Cherry Azalea, (Azalea satsuki 'Nuccio's Wild Cherry'), Dwarf Whitestripe Bamboo, (Plieoblastus variegatus), Japanese Painted Fern, (Athyrium nipponicum 'Pictum') and Golden Variegated Sweet Flag, (Acorus gramineus 'Ogon').
Care
Care Information
Follow a regular watering schedule during the first growing season to establish a deep, extensive root system. Watering can be reduced after establishment. Prune for shape and structure after flowering.
History & Lore
History:
This is an old Japanese variety known as the weeping chrysanthemum cherry. It or it's close relatives known as Sato zakura have been grown in America since 1862 after G. R. Hall brought 15 double-flowered cultivars from Japan. Since then over 45 varieties have evolved, with this one of the most well established forms.
Lore:
The name of this plant, 'kiku-shidare-zakura' translates from the Japanese as "weeping-chrysanthemum-cherry."
Reviews 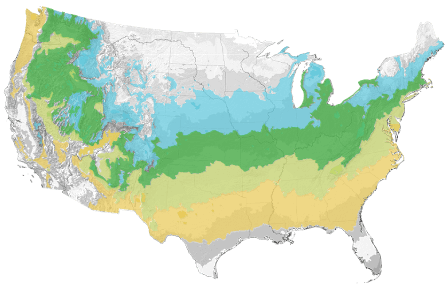