Mass Planting: The simplest way to make an impact

Mass Planting: The simplest way to make an impact 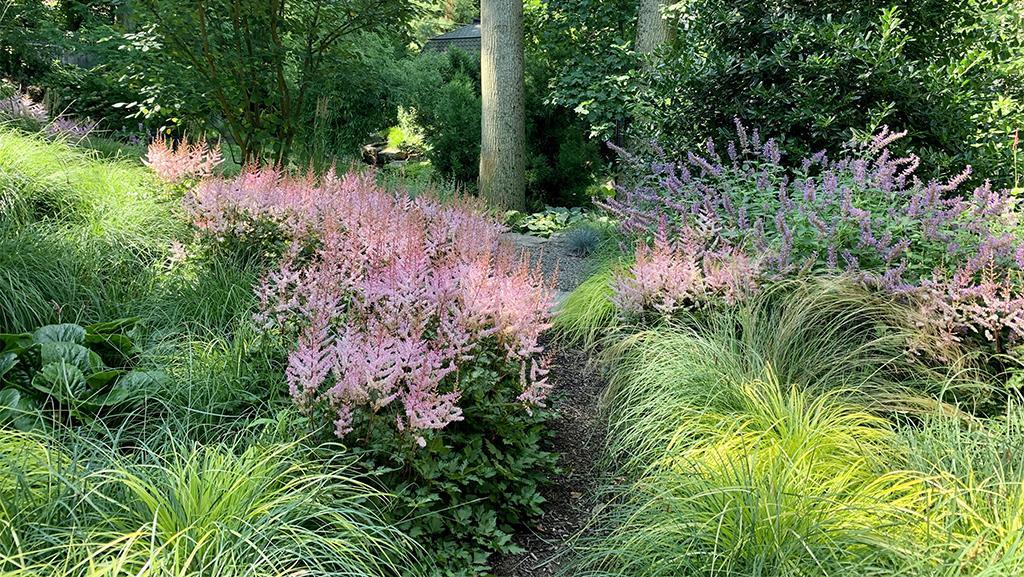 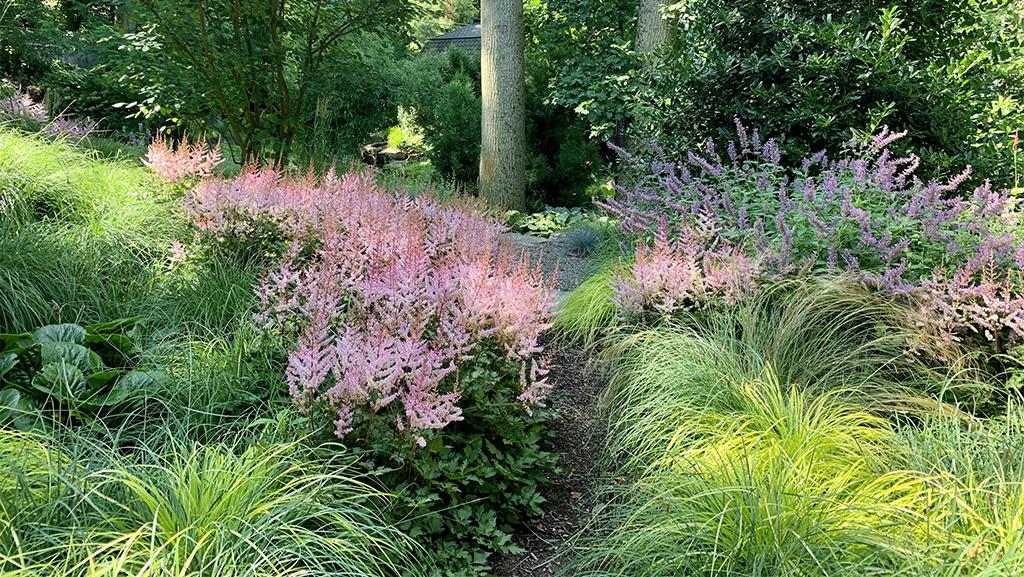 There are all kinds of garden styles and plenty of ways to play with plants, but one simple landscape design technique that never fails to deliver excitement is utilizing one variety that's planted "en masse". We'll take a look at a few gardens and provide some advice to get the look, but first, let's dive into the above-pictured spectacular space comprised of a massing of two easy-care plants— a large drift of astilbe flower plumes rises over a massed bed of soft grassy sedge.

Designed by Craig Wakefield of CW GardenDesign in Philadelphia, this romantic and somewhat wild in effect garden is an idea that works in just about any size yard.

The single butterfly bush that anchors the back corner shows us how we can use a single specimen plant within a massed planting for a visual dynamic that makes an impact. You can get this look by using Wonderful Day Astilbe, Bowles Golden Sedge, True Blue Butterfly Bush in a partly shaded woodland setting.

Love the idea of getting a big bang with just a few types of plants? Read on!

Planting "en Masse": What, Why, and How

What is Mass Planting?

The term "mass(ed) planting", also known as "planting in drifts" and "planting en masse" is a simple yet effective landscape design technique that entails filling a space with groups of the same plant for impact, drama, or harmony. Of course, "mass" is a relative term and could mean a large group of one kind of shrub or it could mean seven pots in a tight cluster. Whether your garden is large or small, modern or cottage, the idea of planting in drifts is the same and the results are usually a spectacular show that draws your eye and demands you to stop and take it in.

Why Should I Plant in Drifts or Masses?

Mass planting as a design idea is nothing new. If you study gardens from medieval to mid-century, you will see the concept beautifully brought to life, but we can trace our contemporary interest to the work of the landscape architects (and masters of modern massing) Wolfgang Oehme and James van Sweden who reinvigorated the concept to new heights in the later part of the 20th century.

At the time, landscapes were becoming more about lush lawns and tight, tidy borders, the concept of which their firm, OEHME, VAN SWEDEN, rejected with their tapestry-like plantings of perennials, grasses, and masses of the same plant (3,000 black-eyed Susans instead of six, for example) in gardens both residential and commercial. Lush, natural, and with emphasis on sustainability, these gardens had a major impact on how we were landscaping.

Taking up this new look (sometimes called "The New American Garden"), many gardeners began, on a small scale, to incorporate this more-is-more-of-one-plant idea into their own backyards to great effect. For more examples, we can look at the amazing work of many renowned landscape designers from the late Dan Kiley to Arne Maynard to see how planting in mass can be used to bring structure with mass plantings in disciplined lines or bountiful billowiness with softly curved lines.

Now, with an intense interest in gardens that are low maintenance and promote sustainability, planting in mass makes all kinds of sense. Plus, it's the simplest way to make a big impact in any garden of any size.

Nature is the queen of massing (just take a look at your nearest natural prairie or meadow) and what we're really trying to do is replicate and get back to those roots, but with lots of different colors, shapes, scents, and textures in mind to avoid what can be monotony.

How Do I Plant En Masse?

How many of one plant constitutes “massing”? Experts will say that seven of one plant is where you start; where you go from there is up to you. This technique works well for woody shrubs, ornamental grasses, groundcovers, sturdy perennials, and even annuals. 20 Nitty Gritty™ roses? 50 Evolution™ coneflowers? 100 Plumetastic® ornamental grasses? Sure! Formal or informal? You bet. You can even group 5 – 6 planted pots together and get the look. And let's not forget one additional benefit beyond the beauty which is a lower maintenance landscape.

To learn more about how to best use drifts of plants in your space, take a look at some examples of massed plantings including natural, informal, and formal styles. Plus, we offer some favorite plant ideas for massing in your garden. 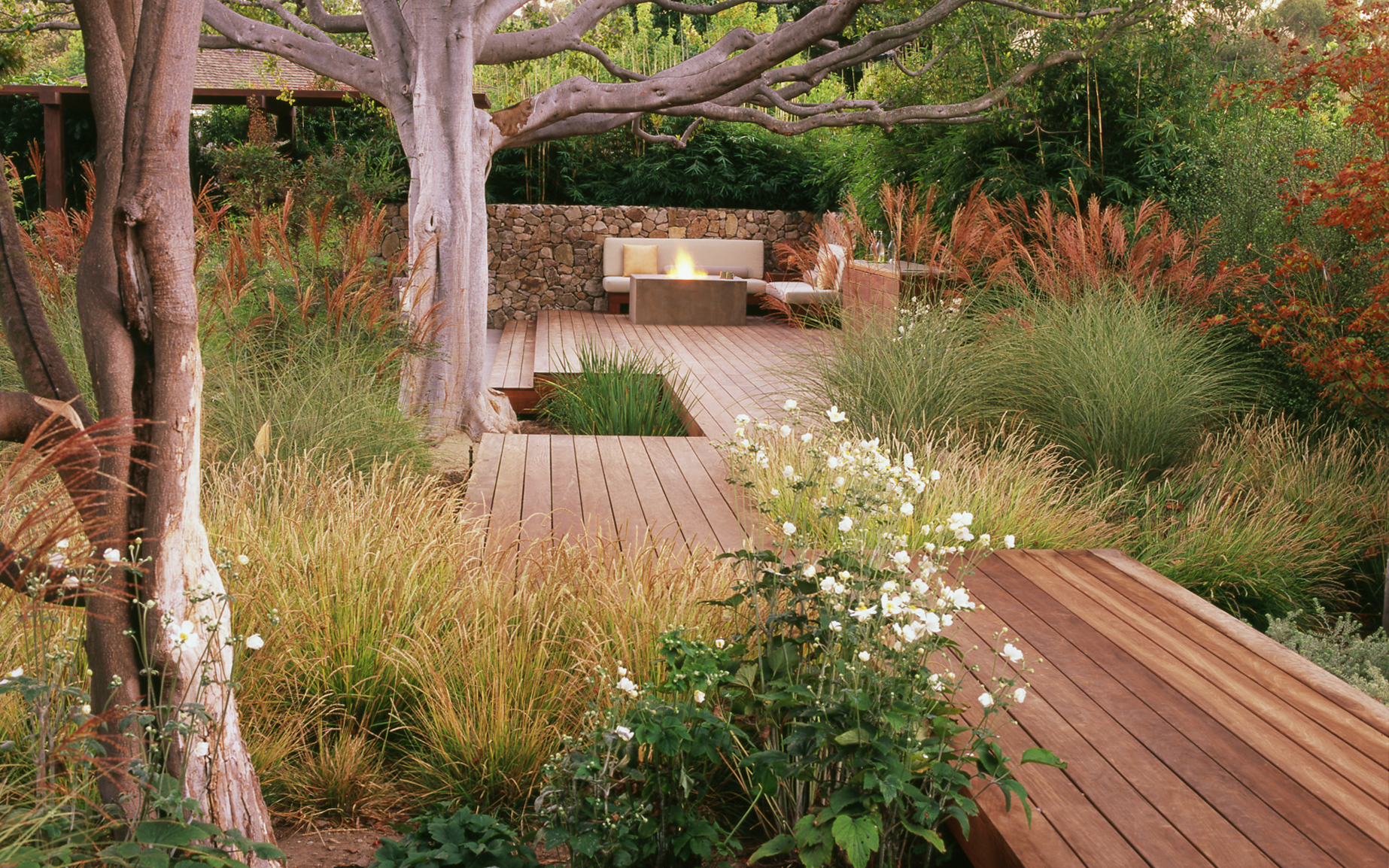 Ornamental grasses are among the most useful of plants for massing because of their blowsy form, tendency to fill out laterally as well as provide height, and, of course, that prairie-like appeal. In this "Pacific Palisades Garden Project" by landscape architect Rob Steiner, you can see how soft billows of massed stands of different varieties of grasses soften the hard lines of the extensive deck. The grassy foliage takes its cue from the landscaping elements including the decking and stone wall. The torch-like frothy blooms and that flaming fire pit? Fabulous combination. This garden shows that massing doesn't have to be done on a grand scale to be very effective. Could you create this moment in your own backyard? We think you could.

Here are three of the plants in this garden that, when massed, create such a natural vibe. 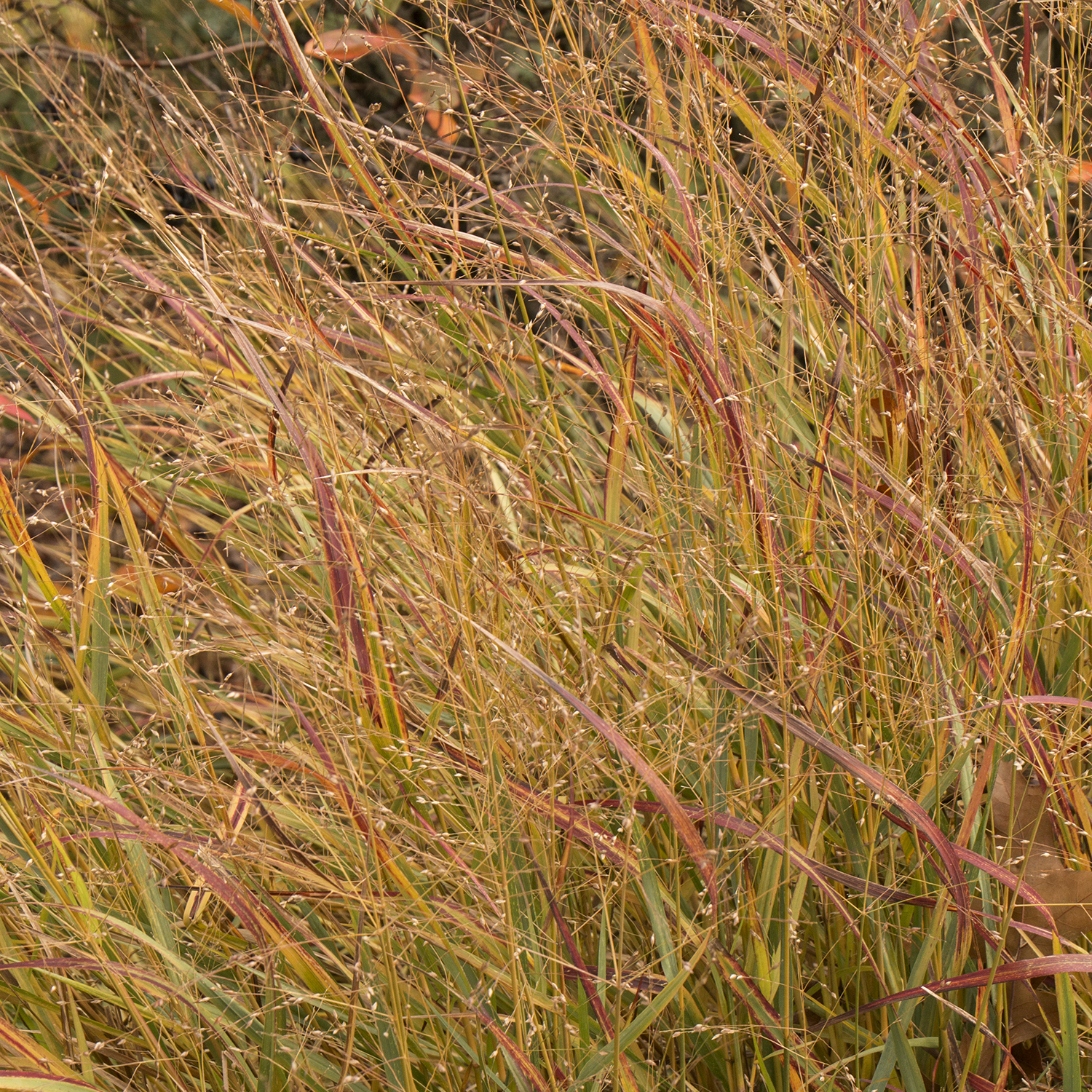 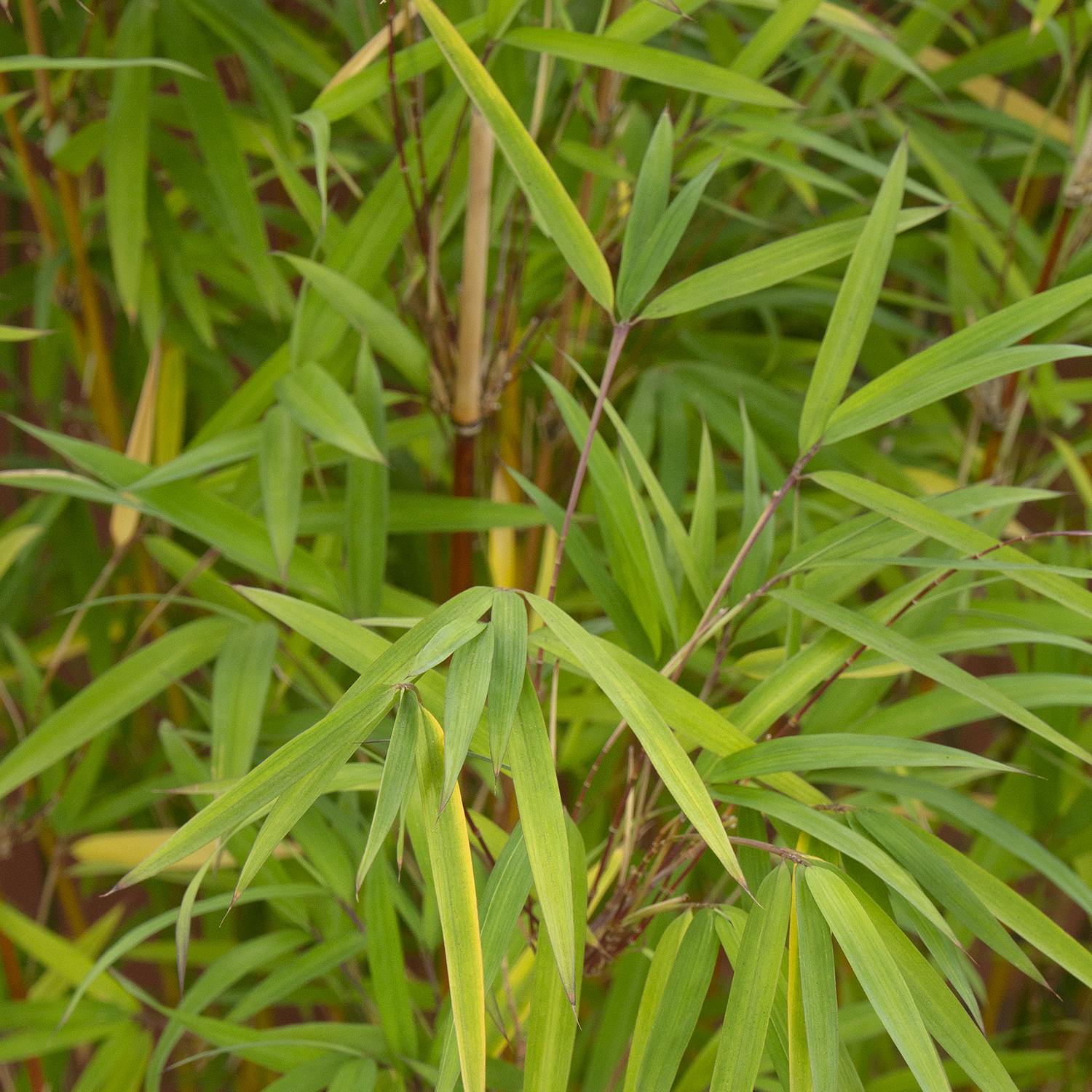 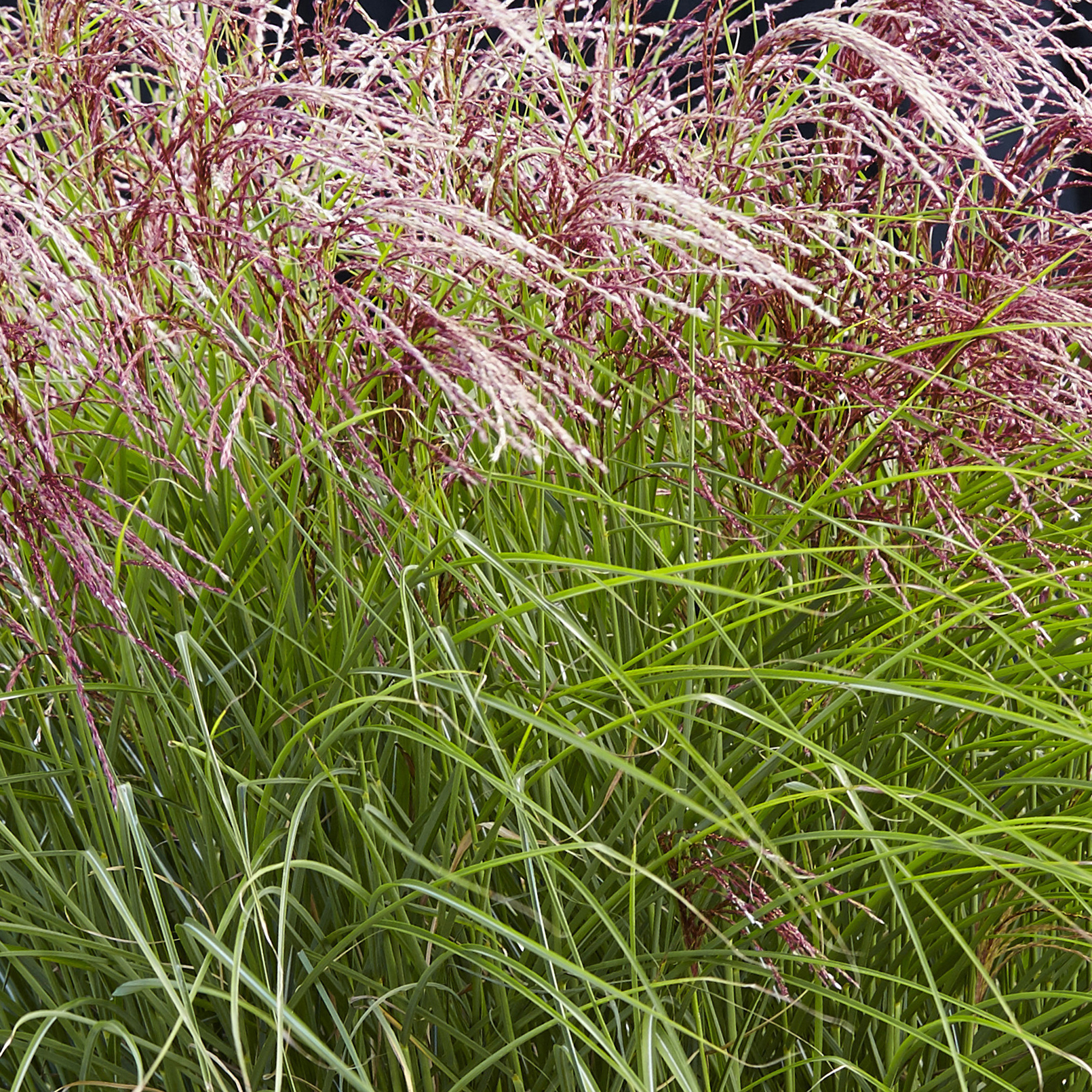 Three seasons of wow darkening to burgundy in fall with airy reddish-pink summer flowers. Up to 4' tall. Zones  4-9.

Perfect non-invasive bamboo to mass in smaller gardens has a well-mannered clumping form. Up to 8' tall. Zones 8-10.

Mass this lush, easy to grow, adaptable grass to add summer color and fall interest to the garden. Up to 4' tall. Zones 6 - 9 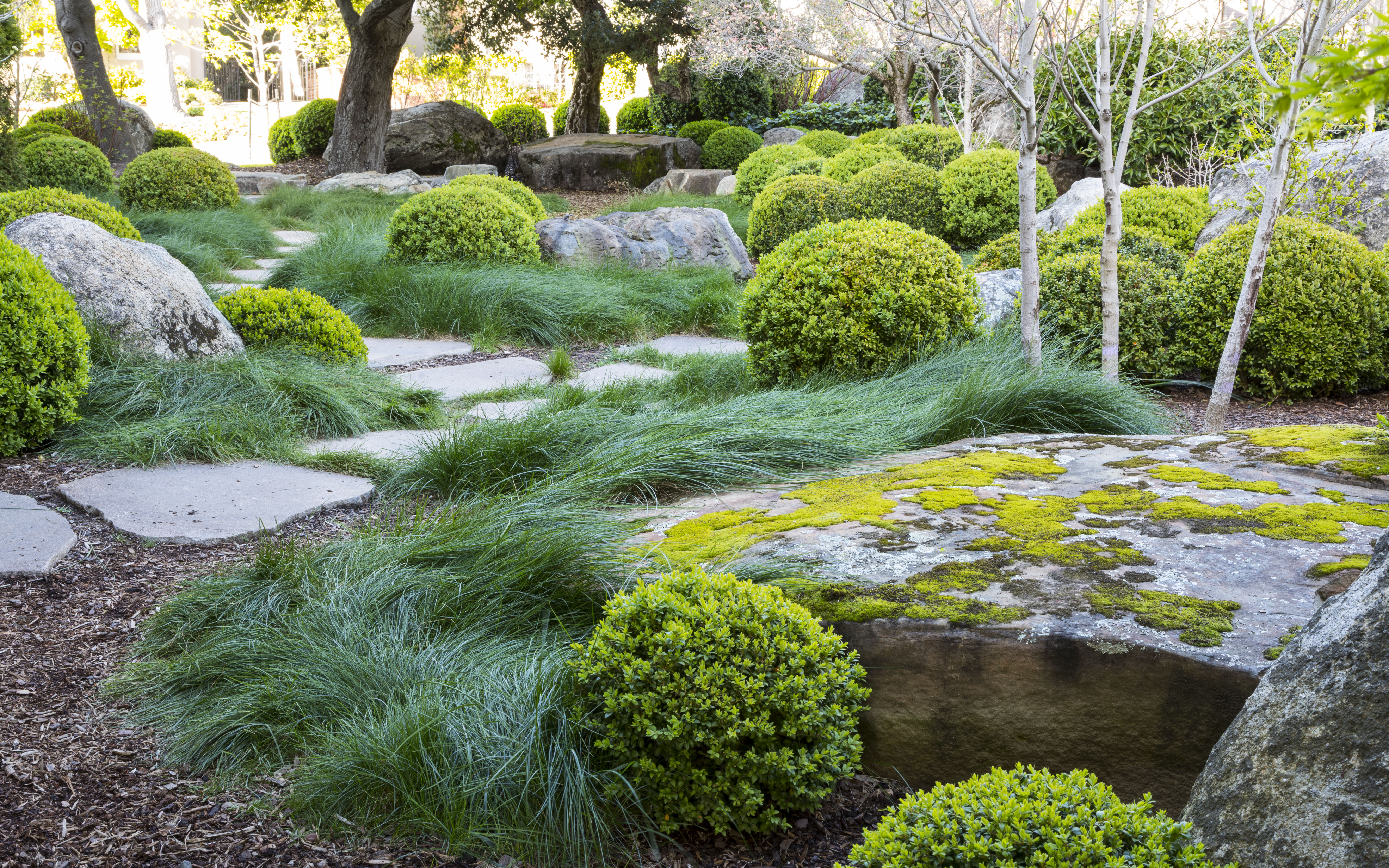 This spectacular installation by landscape designer Scott Shrader shows the power of simplicity and repetition, two hallmarks of great landscape design that require some discipline to pull off effectively. Let's break this down so you can replicate this sophisticated look. This approach is a great example of the rule of three: (1) stands of soft-leaved ornamental grass provide contrast and soften the edges of the (2) large stones and (3) sheared boxwood balls add foundational structure and shape. The combination of these three elements, with the addition of a few birch trees, perfectly-but-randomly massed in number, makes a zen-like space that invites exploration and contemplation.

Do you have space for a large rock or two in your garden? Start there and then build out by massing plants to fill your space. Here are the three plants that make up this serene landscape. 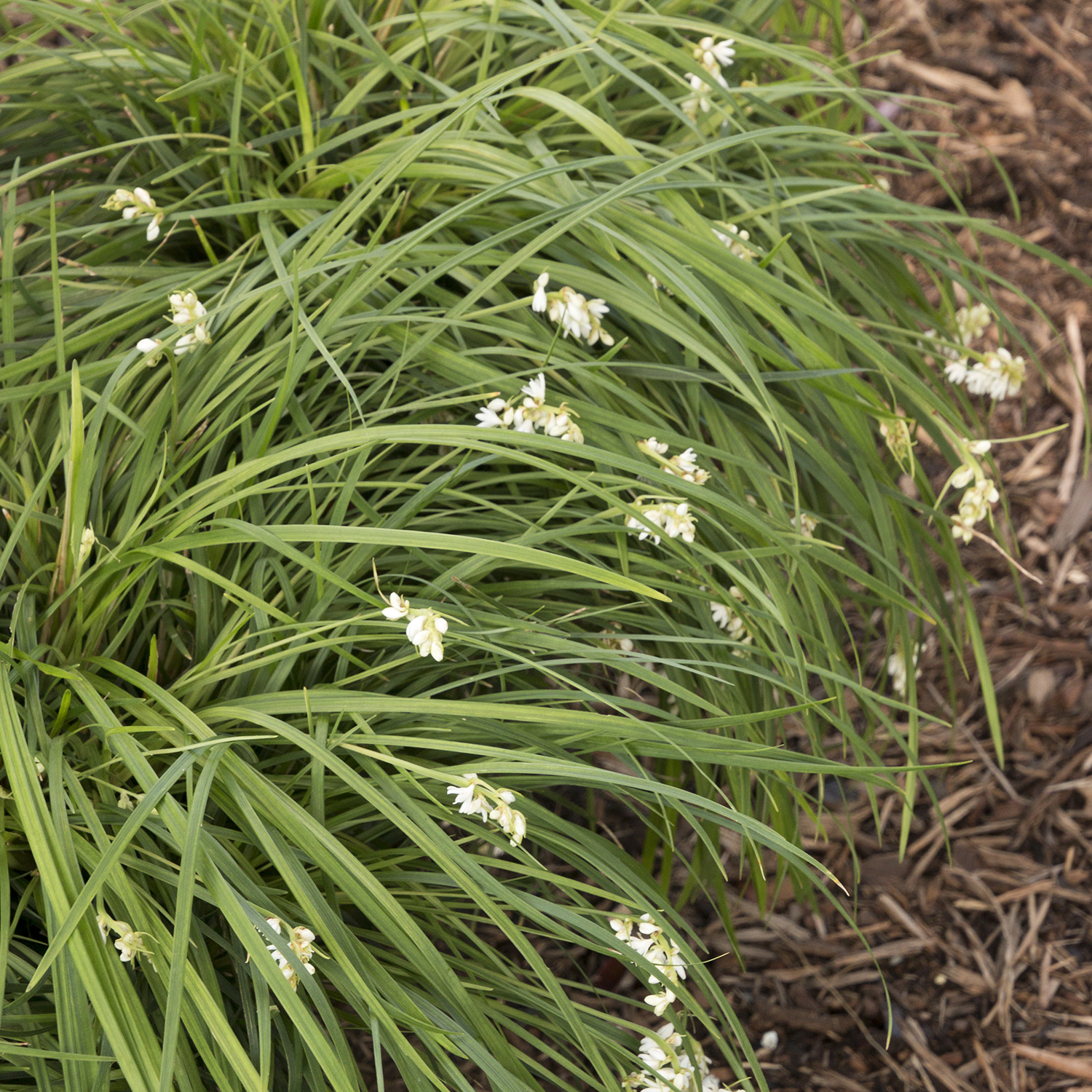 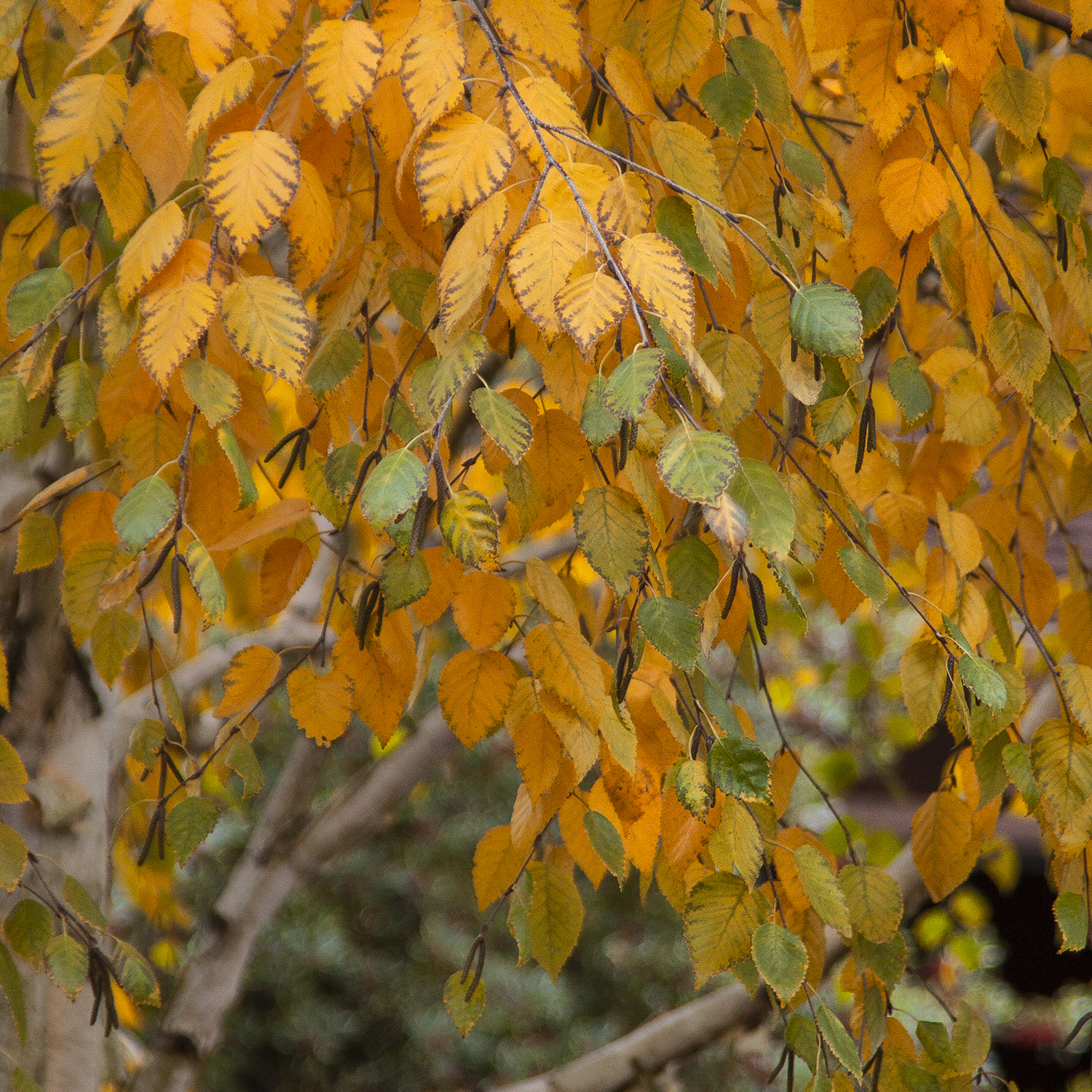 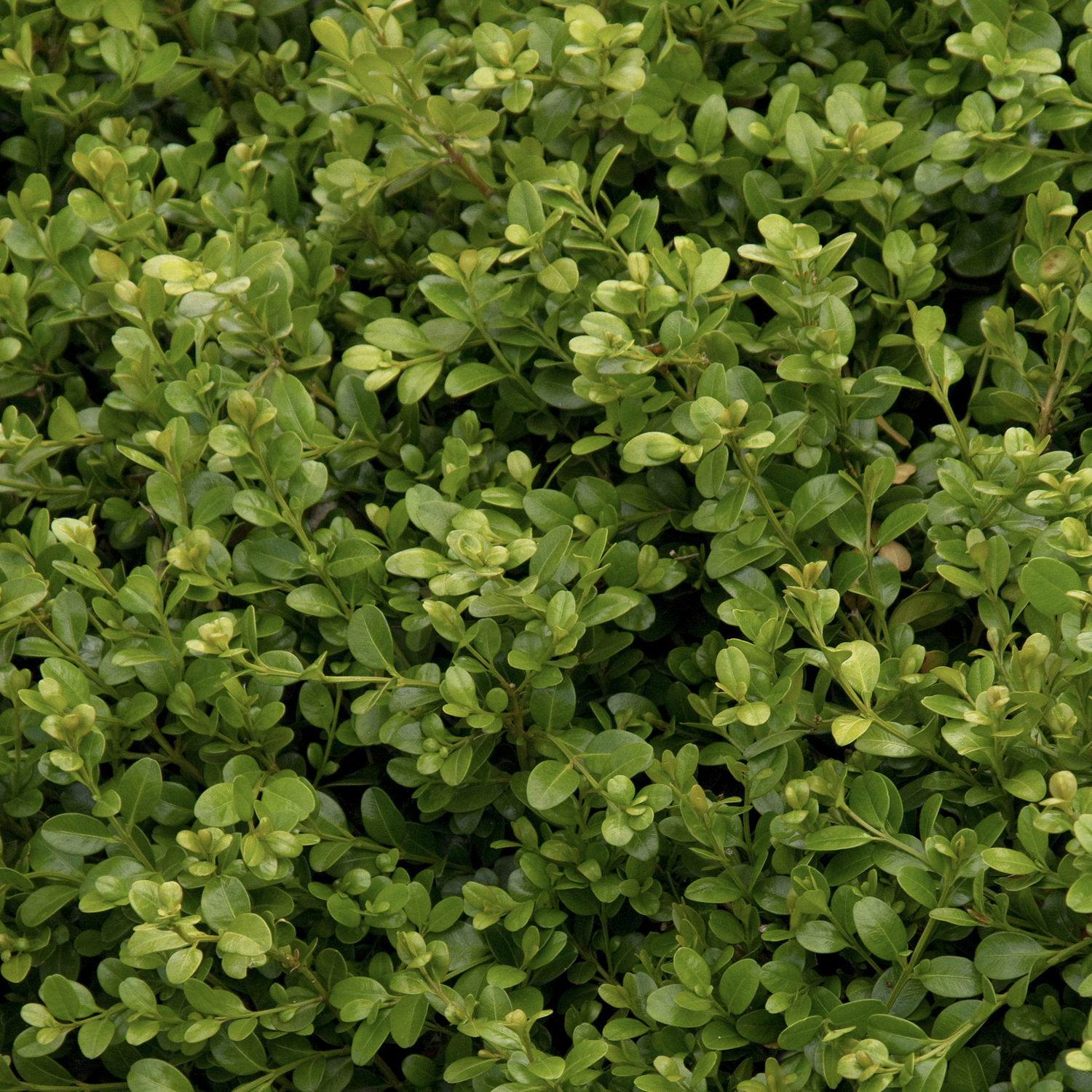 Mass this unique species to form a dense patch with a sort of windswept look. Up to 6" tall, 3 wide. Zones 7-9.

With the most beautiful white bark and an open-branch shape that's natural for massing. Up to 40' tall. Zones 4-7.

Clipped into shapes, filling pots, or massed as a tight hedge, boxwood is a star player. Up to 6" tall. Zones 5-9. 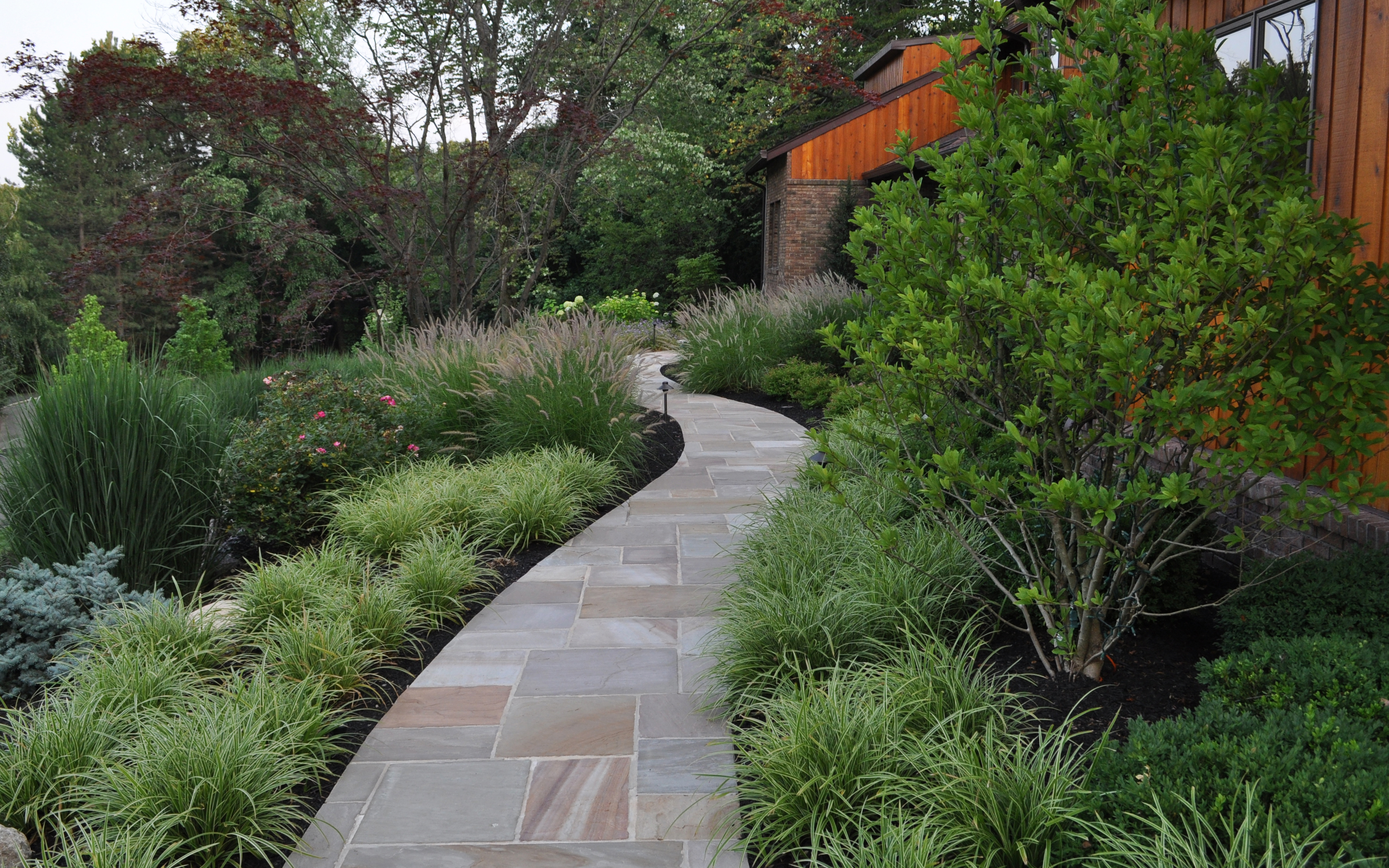 This colorful stone walkway with its sea-and-canyon colored pavers is elegant and refined, but it's the plants spilling over the edges and the variety of heights and shapes that really amplify the rhythmic shape. Created by New Jersey-based CLC Landscape Design, it is a wonderful example of how to play with scale by employing different varieties of massed grasses and shrubs to create undulating waves of color. And, it's really just five different plants, massed well.

Notice how the plants get taller as you get closer to the front door — this inspired use of Karley Rose Fountain Grass is pretty genius. At left, Ice Dance Japanese Sedge in the foreground breezes up against a mass of Grace N' Grit™ Pink Shrub Rose (above) and Dwarf Globe Blue Spruce (below) for a study in contrasts. To the right, a well-mannered Sweet Bay tree anchors the garden (such a useful tree for smaller spaces topping out at just 12'-15' tall).

Breezy and dense, exceptional choice massed as cover ground or forming low border against a walkway. Up to 1' tall. Zones 5-9.

The showy, super-frothy plumes and deeply arching foliage make this a winner for massing. Up to 5' tall. Zones 5-10.

Here, the homeowners were dealing with a need for privacy and a desire for a low-maintenance garden to be viewed from the front door. What could be simpler and more elegant than the classic combination of stately arborvitae shrubs and flowering hydrangeas? Gardens don't have to be complicated to be wonderful, and this sweeping planting requires minimal attention; when those hydrangeas finish their season, the deep-green shrubs keep the picture lively.

Across the way, a shady slope is mass-planted with rhododendron shrubs in a color and flower form that is similar to that of the hydrangeas. This variety reaches about the same height as the hydrangea to create a uniform look. When the rhododendrons fill in, they will provide equal weight on both sides of the walkway throughout the seasons. Sheared boxwoods in three different shapes (round, square, and cone) flank the walkway further unifying the two spaces.

Now, in contrast to this use of arborvitae shrubs, check out the image of them used as a hedge further below. Hedges are a classic way to use shrubs and trees en masse. The same moderately-fast growing evergreen is shown at its maximum height, tightly sheared into a stately green privacy "wall".

Superb to mass as a border for color throughout summer; blue or pink depending on soil. Up to 5' wide. Zones 4-9.

Narrow, pyramidal deep-green evergreen is effective massed for screening or as a tall hedge. Up to 15' tall. Zones 4-8.

How to Plant a Hedge

We've seen how plants such as shrubs and ornamental grasses can be massed to stellar effect, but wide swaths of perennials are a sight to see when they're doing their thing. Here are nine we recommend for massed plantings.

Vibrant red blooms, when mass planted, add a dramatic effect in xeriscape and waterwise gardens. Up to 2' fall. Zones 5-10.

Any heuchera is a natural for massing in shade, but we love this dark foliage . Up to 18" tall. Zones 4-9.

This more compact Russian sage variety fills the mid-summer garden with fragrance and texture. Up to 3' tall. Zones 4-9.

Massing coneflowers provides a sea of summer color but also supports pollinators and other wildlife. Up to 20" tall. Zones 4-9.

Massed in a shady spot for a lush green carpet with spikes of fragrant summer flowers. Up to 20" tall. Zones 3-8.

Mass this tidy dwarf reblooming pink-flowering daylily as a small-scale groundcover in part shade. Up to 15" tall. Zones 4-11.

Bees buzz for this minty-basil-scented beauty. Mass in sunny borders and containers. Up to 12" tall. Zones 4-9.

This intersectional variety offers big blooms on sturdy stems ideal for massing. Imagine the show! Up to 30" tall. Zones 4-8

One of the best perennials for massing in warmer climates and challenging conditions. Up to 30" tall. Zones 8-11

Pro tip—plant at least one or two additional of your chosen massed plants somewhere in your yard at the same time you create your new garden. That way if one fails (it happens!), you have a replacement that is about the same height as the one that didn't make it.