Online Shopping Turned Off... Until PRE-ORDER

Subscribe to be the first to know when PRE-ORDER for 2023 starts. Coming Soon. 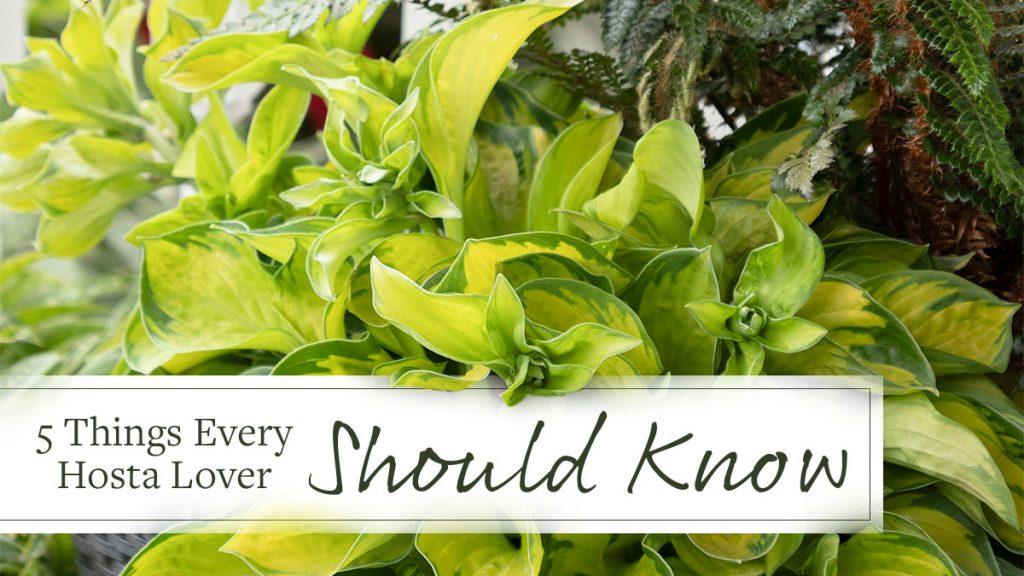 With more than 6,000 named varieties out there and thousands of plants sold each year. It's pretty safe to say that hostas are among the most popular garden perennials. We love the way they seem to pop up out nowhere in the spring when we're not looking. Also how they add luxuriant foliage to shady spaces, and all different colors, textures, flowers, and leaf shapes and forms. Get to know a bit more about this interesting plant (we think you’ll love it even more).

They Only Look Delicate

They look rather tropical in their leafiness, but hostas are hardy. Not just hardy, but tough cookies that have a bottom temperature threshold of -35 degrees F. (That's zone 3 for those who are counting!). In fact, they require at least 30 days at temperatures below 43 degrees F. This is in order to go into dormancy which rules out many varieties for zone 9.

But if you live in a warmer zone, do not count out hostas entirely. There are some that are just fine in warmer climes (see here). For instance these three that we know you will want to think about adding to your garden. 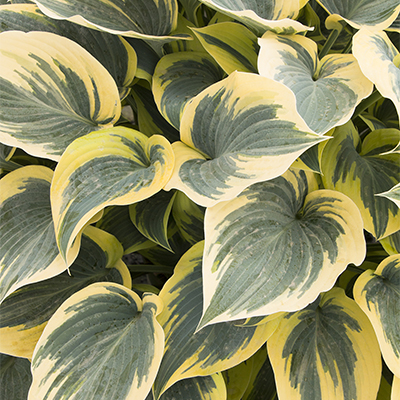 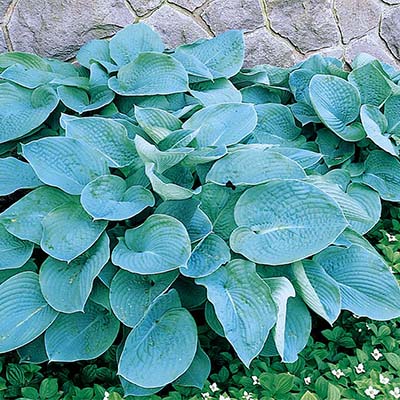 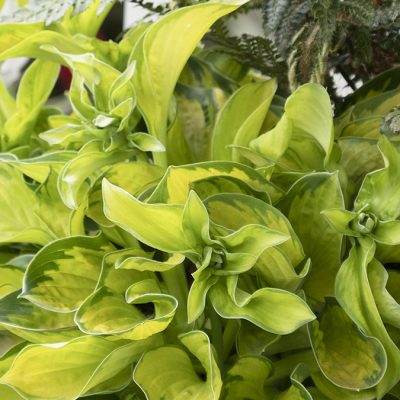 What's With the Blues?

Finding a truly blue-hued flower is the stuff of legend. Although plenty of hostas fill that garden color yen with true-blue foliage. How?  It’s all in the genes.

Here's the science: The genetics of original species hostas allows them to make the special 'crystalline wax' layer. It shows those desirable blue hues. That waxy layer is found in the cuticle which is the topmost layer of the epidermis. It appears as a shiny film or a glaucous outer covering, which gives it the gray-blue appearance. Pretty cool, right?

Can that wax melt? You bet. Though some varieties are less impacted (such as Abiqua Drinking Gourd) wax can come off due to rainfall. It can also come off with wind and watering, but heat and sun are the most prominent cause of damage. So, plant blue hostas out of direct sun. Here are three brilliant blues. 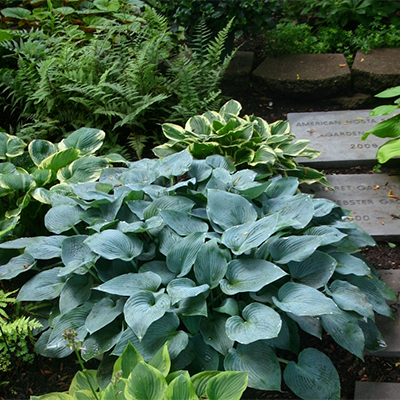 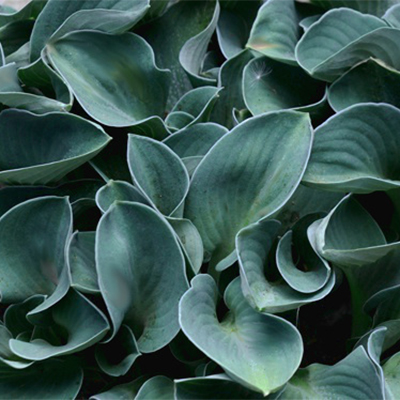 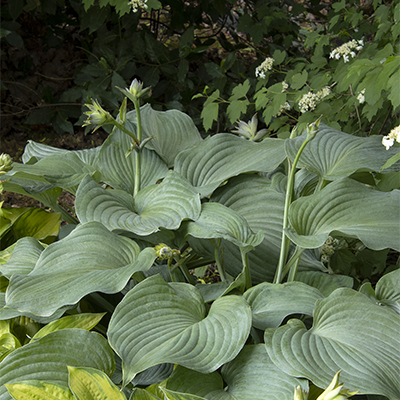 “I love slugs,” said no one ever. The recipe of warm days + ample moisture + tasty hosta leaves are like ringing the dinner bell. There are many homegrown deterrents from pine needles and slug traps to copper pennies and beer trays. The best place to start is by eliminating places slugs can hide. Rake up fallen leaves. And, think about planting varieties with thicker, heavily textured leaves that are more slug resistant.

Finally, consider this–slugs are an important part of a complex food chain. Having them in your garden encourages visits from valuable critters such as birds, beetles, toads and slow worms. All of which will eat large quantities of slugs or snails. And also stay to contribute to the overall health of your garden.

Here are three hostas that are more resistant to damage by slugs (of course, a hungry slug…) 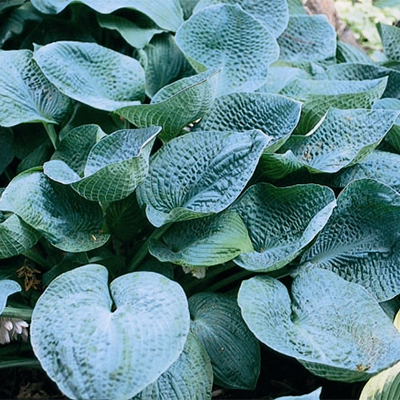 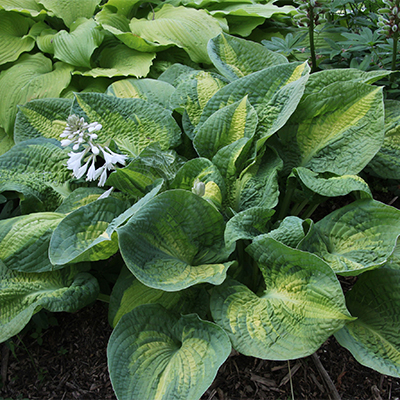 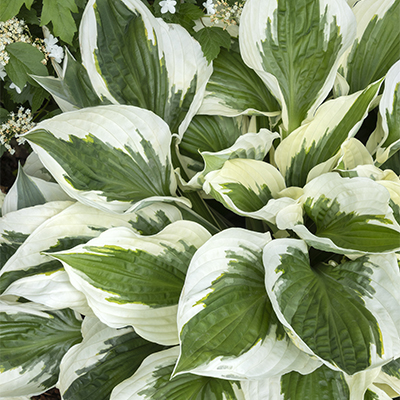 Let’s start with fragrance (who doesn’t want more of that in the garden!). Some, but not all hostas have very fragrant flowers. Especially in the evening when they emit a scent that's been said to be a cross between daffodil and lily. Fragrant Bouquet Hosta is one to try.

Are hosta leave edible? Well, yes and they’re quite popular in places like Japan. But here's the thing. We're talking about those very tender new leaves that you see shooting up and unfurling early in the season. Rather than those mature ones you might pluck from the summer garden. (Always harvest leaves from plants that have NOT been treated with inorganic chemicals.) Flowers are also edible.

When it comes to the tall flower stalks there are two teams–the snippers and the keepers. To some the flowers are just plain not pretty. While others (like yours truly) love the airy blooms and the spiky stalks. Where do you land on this one? Let us know in comments.

There's One for Every Size Garden

Hostas range from petite to enormous, so there’s probably one for every shady spot in your garden. Smaller varieties look great in mixed containers or as a colorful leafy border for a bed. Even as massed at the edge of the canopy of a shade tree or in an island bed. The larger ones are statement makers. They need plenty of space around them to really appreciate the scale and their leafy goodness. Some like to mass one variety, others prefer a hosta collection. That’s how versatile this little herbaceous perennial can be.

So, that’s just a bit to know about this beloved, useful shade perennial. Do you have a favorite variety? Share in comments below.

Previous Post Next Post
2019-03-12 11:39:00
SHOW COMMENTS HIDE COMMENTS
Natalie
Love your emails This info on Hosta is perfect for me. Spot on! I am eager to plant mine.
Reply
rena persico
the past few few years, in early spring as the shouts appear above ground I see what looks like a straw like substance around the base that almost looks like dried roots. no one knows what it is, I have even spoken with to various nurseries and no one seems to know what it is. please advise me, as I love hostas!
Reply
Debra Brown
Great article! I really enjoyed reading it!
Reply
Vince H.
Thanks for sharing the information on Hostas, there are many that will do well in my zone(9). I like them all...Thank you.
Reply
Blanche Stevens
I love the Golden Prayers hosta. Where can I buy one or two?
Reply