5 Ways To Design With Ornamental Grasses

5 Ways To Design With Ornamental Grasses

Low maintenance, year-round interest, fast-growing, attract wildlife, often drought- tolerant—all excellent reasons for planting lavish stands of ornamental grasses in your landscape. But, it’s really about the soft, gentle movement brought on by even a slight wind that makes them a must-have. It’s one of the most useful types of plants you can use in your designs; here are five ideas to get your started.

Naturalistic and meadow-like plantings continue to be a trend (though timeless designs never do go out of style, do they?) which has extended to using taller grasses for hedges and screens. And, why not? They’re fast growing, many are water-wise once established, and need very little maintenance; cut down annually and divide every few years. If year-round privacy is critical, plant something evergreen behind them. 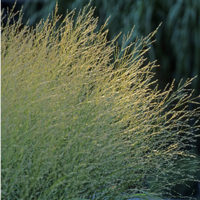 Spikes of tiny purplish flowers rise above the foliage, nearly shimmering when back-lit by the sun. Reaches up to 8 ft. tall. 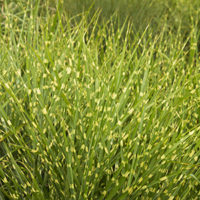 Foliage is highlighted by dramatic golden bands, and reddish-bronze plumes in summer. Reaches up to 8 ft. tall. 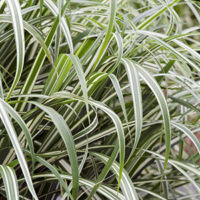 Copper-colored plumes age to a cream color on stems that blush pink as they mature. Reaches up to 7 ft. tall.

Rock gardens, hot, sunny, dry slopes, dry shade, water-wise lawns, fronts of borders, no-fuss pathway edgings–any space where you want something frothy rather than flat that’s easy care and generally tidy is where to use these very useful sorts of grasses. The point here is to let them do their thing, so plant where they’ll be allowed to spill, and put away the edgers and string trimmers. 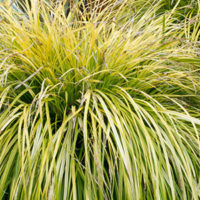 Forms an compact, easy-care, low mound that is perfect for massing. Reaches up to 15 in. tall. 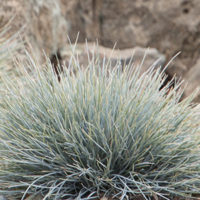 Exceptionally icy blue coloration holds up even through the heat of summer. Reaches up to 1 ft. tall. 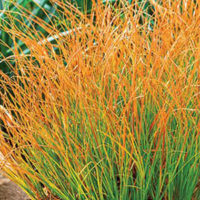 Olive green foliage with bronze-orange highlights that appear to shimmer in full sun. Reaches up to 24-in. tall.

A single ornamental grass as a focal point or planted in a large pot can be a stunning addition to any landscape, but if you have the space and really want to make a real statement, plant them in masses. A sea of grasses, whether of different varieties, heights, and textures, or a dense grouping of a single variety is a powerful visual treat and an effective, low-maintenance way of dealing with large areas. 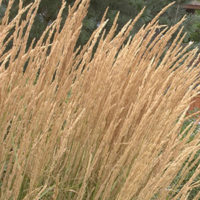 Stunning vertical effect of feathery stalks that emerge reddish-brown and turn golden in fall. Reaches up to 6 ft. tall.

Mass so the display of delicate cloud of summer blooms can be appreciated. Reaches up to 2 ft. tall. 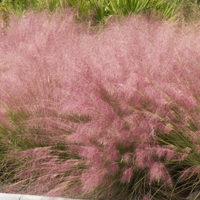 Masses of airy pinkish-red flowers are stunning when backlit by the sun. Reaches up to 4 ft. tall.

Add Zip to the Fall Garden

You enjoyed their emerging spring foliage and breezy movement, but ornamental grasses can fade into the background in summer as other, more colorful plants come into bloom. Suddenly, it’s late August to early autumn and the garden is fading. Just then ornamental grasses take center stage as feathery or frothy plumes begin to change color, as does the foliage. Layer grasses into your beds and border to keep the show going into fall. 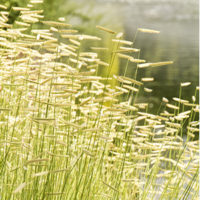 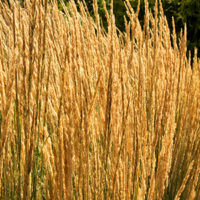 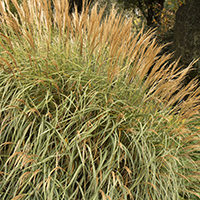 Graceful, silvery-green arching foliage becoming a whirl of orange, gold and burgundy in fall. Reaches up to 5 ft. tall.

Got a retaining wall, light post, water feature, stone pathway, even a mailbox where you need to take the edge off? Need to hide an air conditioner or other ugly-but-needs-to-be-accessible utility? Grasses can soften the impact of these hard materials. Pay careful attention to the ultimate height and width when using grasses in these applications; you don’t want to be fighting with the wrong plant, cutting it back to fit the space. 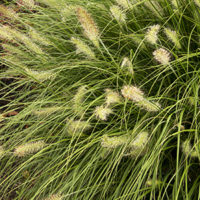 Fluffy, buff-colored plumes arching above foliage that which turns golden-russet in fall. Reaches up to 3 ft. tall. 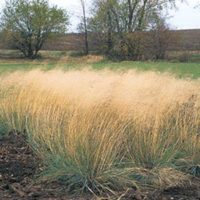 Tall plumes dance in the wind aging to tan by late summer, holding into autumn. Reaches up to 3 ft. tall. 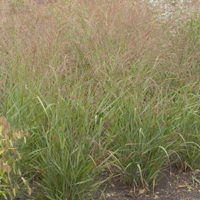 Combine both types for a grassy show of at least six month. Plant cool season types in front of warm season ones; as the early grasses go dormant, they’ll reveal the later varieties.

Much has been written about the invasive nature of some grasses, and it’s important to be aware of what’s appropriate for your particular area. A grass that can be invasive in one climate, can be perfectly acceptable in another climate or region. Consult your local independent garden center for more information, or you can look up which plants the USDA considers invasive by state via this link.